VBA Assert – How To Make Your Code BulletProof

But don’t let the simplicity fool you. When used correctly, the VBA assert statement will vastly reduce the number of errors in your VBA code. I have used this technique thousands of times on countless projects. It will save you considerable time creating applications and it will make your application practically bulletproof.

If you adopt this technique then I guarantee you will see results almost immediately. Reading about the VBA Assert statement is not enough – you have to actually try it out for yourself. Once you see how useful it is you will want to keep using it.

A Startling Fact About Errors in Code

“I am indeed amazed when I consider how weak my mind is and how prone to error.” – Rene Descartes

According to Steve McConnell in ‘Code Complete: A Practical Handbook of Software Construction’: “there are about 15 – 50 errors per 1000 lines of delivered code”.

Just think about this for a moment. If you average the time on each bug to 30 minutes then you are talking 8 to 25 hours spent on errors for every 1000 lines of code.

30 Minutes is an optimistic average. When a bug is found in delivered code many of the following steps are required

If you find a bug in development:

This leads us to the following rule:

Therefore finding bugs early and close to the cause is a priority. Let’s have a look at your first line of defence when it comes to errors. Then we will look at the Debug.Assert statement.

VBA has built-in tools for finding errors. These are very important for catching errors before you run your code. So it’s vital that you use them in your development. I’m going to briefly mention them here.

VBA checks each line of code as you write it for syntax errors. When you press Return it will check the line for errors and display an error message if it finds one.

Syntax errors are when you write code that doesn’t follow the rules of Visual Basic syntax. Most of these errors are caused by omitting expected syntax.

Some examples of syntax errors are:

The compiler finds errors that involve more than one line of code. It checks the entire project for errors. To compile select Debug->Compile VBAProject from the menu.

Examples of compiler errors are as follows:

Note: When you run the code it will also find compile errors. However, it will only check the code in the subs/functions that it reaches. Therefore you should always use Debug->Compile to find and remove errors before you run your code.

When an error occurs, while our code is running, VBA will use display the error and pause the code if you are not using any error handling methods like “On Error Goto”.  If you want to know more about error handling I have written an entire post about it here.

The problem with these errors is that they may not occur where the actual problem is. So we have to debug the code(i.e. step through the code line by line)  to find the origin of the error. This can be very time consuming trying to recreate the error and trace the origin.

Why Use the VBA Debug.Assert Statement?

When we are writing our code there we can spend a lot of time trying to find and fix errors. When we are constantly adding code are introducing errors that we may not be aware of.

What we need is an early detection system for errors.

A great description of Assertions is as follows:

The key phrase here is “automatically detect”. Once you add Assertions to your code they will automatically check for errors each time you run your code. This makes it very difficult for errors to remain undetected. Therefore, running your code while using Assertions is a fantastic way of smoking out errors.

Assertions are used when writing code to check your code as it runs. An Assertion is a statement that evaluates to true or false. If it evaluates to false then the code stops at that line. This is useful as it stops very close to the cause of the error.

Let’s explain using an analogy. Imagine the different paths through your code were the streets of a city and variables were vans that drove around the city streets. Assertions would be checkpoints at each intersection that ensure the vans(variables) contain valid goods(values) before they are allowed to pass. 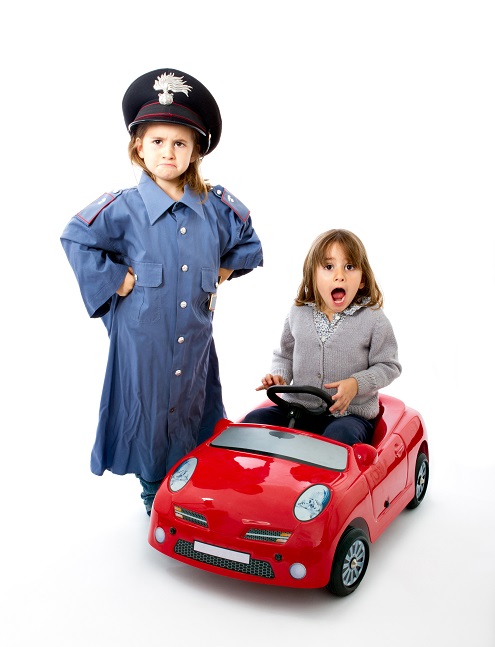 If the city was full of checkpoints it would be very difficult for the van to travel far with invalid goods. It’s the same with code. The more Assertions there are the harder it is for errors to remain undetected.

In the city example, the checkpoints would affect performance. They would slow the city traffic considerably. The beauty of the VBA Debug.Assert statement is that there are no performance issues. This is because they are turned off when you deliver your software to the user. This means you can add as many Assertions as you like and it will have no effect on how your code runs for the user.

You Tube Video on Debug.Assert

Watch the explanation of Debug.Assert in this video:

You can get the demo workbook and code for the video here.

It is simple to create an assertion in VBA. You use the function Debug.Assert followed by a Condition like this:

When the code meets a Debug.Assert line it evaluates the condition to be either true or false. The following happens based on the condition:

When the code pauses we can then check the variables and see what the problem is.

Here is an example of how that works:

How to Use the VBA Debug.Assert Statement

The best way to use the VBA Assert statement is to test the following items:

The following functions use the VBA Debug.Assert statement to test:

In the next example, we use an Assertion to test the return value from a function:

Error handling is used in code to anticipate error conditions and deal with them.

For example, sometimes a workbook you are trying to open may have been moved, deleted or renamed. In this case, the code should report the error and return to the state before it tried to use this file.

The following code shows a simple example of error handling. We use the Dir function to check the file exists. If not then we inform the user there is a problem. We only attempt to open the file when we know it actually exists.

The difference between Assertions and Error Handling is that:

Let’s update the example above so it uses both Assertions and Error Handling:

If these seem confusing just remember you mostly use assertions on arguments and return values.

How to Turn VBA Debug.Assert On or Off

Assertions are used to check your code during development(writing the code) or maintenance(adding updates to the code or fixing errors). When you give your application to a user you then you turn the Assertions off. This provides us with two really great advantages:

Let’s look at how to turn Debug.Assert on and off.

To turn Assertions On/Off we use a special type of If statement to surround our code. This is the #If statement – note the #character before the If keyword . First of all we need to create a  “Conditional Compilation Argument” that we can use in the #If statement. Ignore the cryptic sounding name as it very straightforward to use. 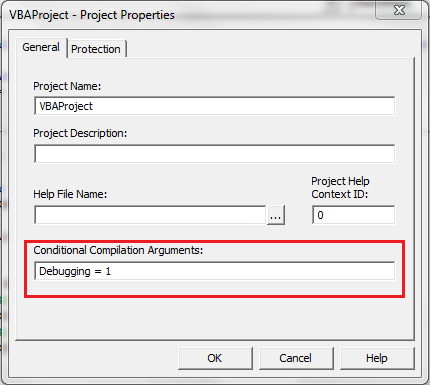 You can see in the screenshot that we have written Debugging = 1 in the “Compilation Arguments” textbox. We can use any name we like. I have us Debugging here but we can call it anything. The =1  means it is currently true.

In the above example, the assertions are only used when Debugging is turned on(i.e. set to a value other than 0). When we turn Debugging off(set to zero) this code will not be used.

When we want to turn off the Assertions we simply change the Conditional Argument in the dialog to Debugging=0 or remove it altogether. Both of these situations mean that all the code inside the #If Debugging statements will not be used.

If we have #If statements everywhere in our code it can look really untidy. We definitely don’t want code like this:

We can create a much nicer version of this code by creating our own simple DebugAssert sub:

We can use it as follows:

You can see that this makes our code much neater and much more readable.

What to Avoid with Debug.Assert

Never put executable code inside a #If statement. Only use code that will help you when debugging. In VBA this is essentially the two statement types Debug.Assert and Debug.Print.

The following example is something you should avoid doing:

The correct way to write this code is shown in the following example:

In the second example, there is no executable code in the #If statement. This is important as it means the code will run exactly the same when you turn debugging on or off.

Using Assertions With Collections and Objects

When you are using a Collection you should check two things:

Let’s look at how to create a collection. We can declare in one line and create in a second line like this code shows

We can also declare and create a Collection in one single line as the next example shows.

In the first example, the variable Coll is set to Nothing until we use the Set command to create a new Collection for it.

So when using Collections(or any object) we need first to check they are not empty(Set to Nothing).

This code may seem strange as it has two negatives – Not and Nothing. However all objects are tested this way so you can use it even if you don’t understand it at first.

The next example shows Assertions that test a Workbook and Worksheet object to ensure they have been assigned to something.

When using Collections it is also a good idea to check that it contains some elements:

We use cookies to ensure that we give you the best experience on our website. If you continue to use this site we will assume that you are happy with it.Ok