The Complete Guide To The VBA Workbook

“We are drowning in information but starved for knowledge.” – John Naisbitt

This post provides a complete guide to using the VBA Workbook.

For all other VBA Workbook tasks, check out the quick guide below.

A Quick Guide to the VBA Workbook 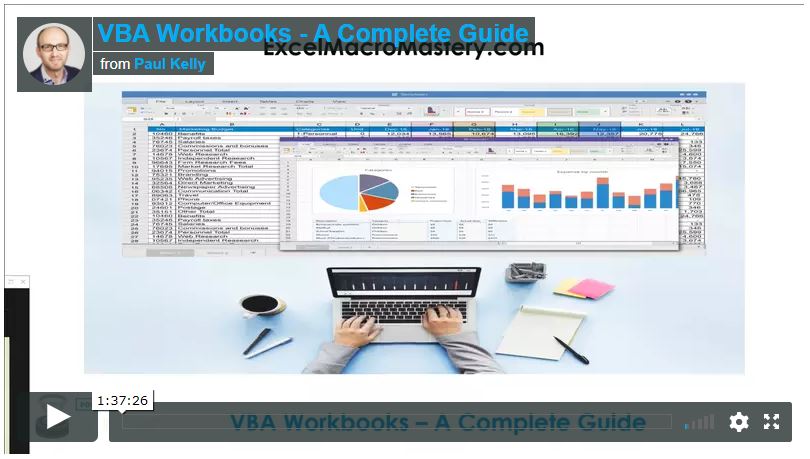 Getting Started with the VBA Workbook

We can access any open workbook using the code Workbooks(“Example.xlsm“). Simply replace Example.xlsm with the name of the workbook you wish to use.

The following example shows you how to write to a cell on a worksheet. You will notice we had to specify the workbook, worksheet and range of cells.

This example may look a little be confusing to a new user but it is actually quite simple.

The first part up to the decimal point is the Workbook, the second part is the Worksheet and the third is the Range. Here are some more examples of writing to a cell

You can see the simple pattern here. You can write to any cell in any worksheet from any workbook. It is just a matter of changing the workbook name, worksheet name and the range to suit your needs.

Take a look at the workbook part

The Workbooks keyword refers to a collection of all open workbooks. Supplying the workbook name to the collection gives us access to that workbook. When we have the object we can use it to perform tasks with the workbook.

When you use the Workbooks collection to access a workbook, you may get the error message:

Run-time Error 9: Subscript out of Range.

This means that VBA cannot find the workbook you passed as a parameter.

This can happen for the following reasons

If you cannot resolve the error then use either of the functions in the section Finding all open Workbooks. These will print the names of all open workbooks to the Immediate Window(Ctrl + G).

Examples of Using the VBA Workbook

The following examples show what you can do with the workbook.

Note: In the code examples I use Debug.Print a lot. This function prints values to the Immediate  Window. To view this window select View->Immediate Window from the menu( Shortcut is Ctrl + G) 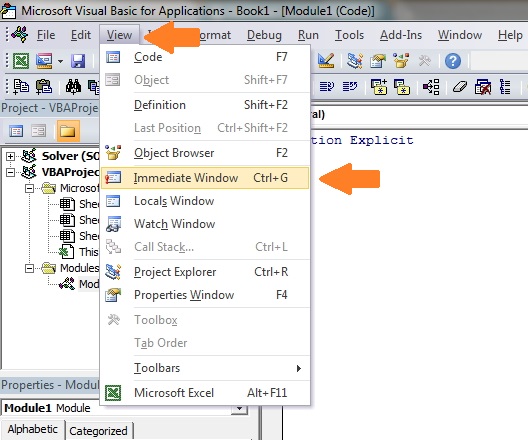 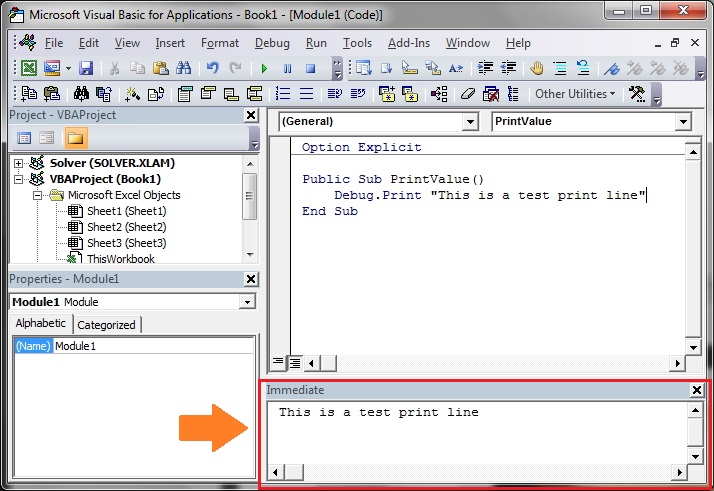 Accessing the VBA Workbook by Index

You can also use an Index number with Workbooks(). The index refers to the order the Workbook was open or created.

Using the index is not really useful unless you really need to know the order. For this reason, you should avoid using it. You should use the workbook name with Workbooks() instead.

Sometimes you may want to access all the workbooks that are open. In other words, all the items in the Workbooks() collection.

You can do this using the For Each loop.

For accessing workbooks, either of these Loops is fine. The standard For loop is useful if you want to use a different order or you need to use a counter.

Note: Both examples read in the order of the first opened to the last opened. If you want to read in reverse order(last to first) you can do this

So far we have dealt with workbooks that are already open. Of course, having to manually open a workbook before running a Macro, defeats the purpose of automating tasks. The Open Workbook task should be performed by VBA.

The following VBA code opens the workbook “Book1.xlsm” in the “C:\Docs” folder

It is a good idea to check a workbook actually exists before you try to open it. This will prevent you getting errors. The Dir function allows you to easily do this .

The function below can be used to check if the workbook is currently open. If not, then it will open the workbook. In either case you will end up with the workbook opened.

(The code below is taken from this StackOverFlow entry.)

An easy way to deal this with this scenario is to insist that the file must be closed for the application to run successfully. You can use the function below to simply check is the file already open and if so inform the user that it must be closed first.

(The code below is also taken from this StackOverFlow entry)

An example of using this function is shown below. In this case, if the workbook is already open then you inform the user that is must be closed for the macro to proceed.

To Close a Workbook in Excel VBA is very simple. You simply call the Close method of the workbook.

Normally when you close a workbook in VBA, you don’t want to see messages from Excel asking if you want to save the file.

You can specify whether to save the workbook or not and then the Excel messages will not appear.

Obviously, you cannot save changes to a workbook that is currently open as read-only.

We have just seen that you can save a workbook when you close it. If you want to save it any other stage you can simply use the Save method

You can also use the SaveAs method

The Workbook SaveAs method comes with twelve parameters which allow you to add a password, set the file as read-only and so on. You can see the details here.

If the workbook is open you can use the two methods in the above section to create a copy i.e. SaveAs and SaveCopyAs.

Using the File Dialog To Open a Workbook

The previous section shows you how to open a workbook with a given name. Sometimes you may want the user to select the workbook. You can easily use the Windows File Dialog shown here. 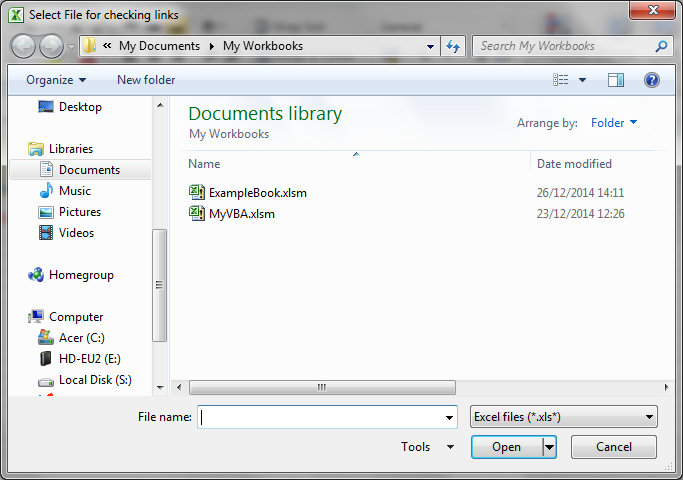 The FileDialog is configurable and you can use it to

If you just want the user to select the file you can use the GetOpenFilename function.

The following function opens a workbook using the File Dialog. The function returns the full file name if a file was selected. If the user cancels it displays a message and returns an empty string.

You can customise the dialog by changing the Title, Filters and AllowMultiSelect in the UserSelectWorkbook function.

If our code is in a workbook call MyVBA.xlsm then ThisWorkbook and Workbooks(“MyVBA.xlsm”) refer to the same workbook.

Using ThisWorkbook is more useful than using Workbooks(). With ThisWorkbook we do not need to worry about the name of the file. This gives us two advantages:

These may seem like very small advantages. The reality is your filenames will change all the time. Using ThisWorkbook  means your code will still work fine.

ActiveWorkbook refers to the workbook that is currently active. This is the one that the user last clicked on.

This can seem useful at first. The problem is that any workbook can become active by a simple mouse click. This means you could easily write data to the wrong workbook.

Using ActiveWorkbook also makes the code hard to read. It may not be obvious from the code which workbook should be the active one.

I hope I made it clear that you should avoid using ActiveWorkbook unless you really have to. If you must then be very careful.

Examples of the Accessing the Workbook

We’ve looked at all the ways of accessing a workbook. The following code shows examples of these ways

The reason for declaring a workbook variable is to make your code easier to read and understand. It is easier to see the advantage of using an example

You can set a workbook variable with any of the access methods we have seen.

The following shows you the same code without a workbook variable

In these examples the difference is not major. However, when you have a lot of code, using a variable is useful particularly for worksheet and ranges where the names tend to be long e.g. thisWorkbook.Worksheets(“Sheet1”).Range(“A1”).

You can name the workbook variable to be something like wrkRead or wrkWrite. Then at a glance you can see what this workbook is being used for.

To create a new workbook you use the Workbooks Add function. This function creates a new blank workbook. It is the same as selecting New Workbook from the Excel File menu.

When you create a new workbook you will generally want to save it. The following code shows you how to do this.

When you create a new workbook it normally contains three sheets. This is determined by the property Application.SheetsInNewWorkbook.

If you want to have a different number of sheets in a new workbook then you change this property before you create the new workbook. The following example shows you how to create a new workbook with seven sheets.

The With keyword and the Workbook

The With keyword makes reading and writing VBA code easier. Using With means you only need to mention the item once. With  is used with Objects. These are items such as Workbooks, Worksheets and Ranges.

The following example has two Subs. The first is similar to code we have seen so far. The second uses the With keyword. You can see the code is much clearer in the second Sub. The keywords End With mark the finish of a section code using With.

This was an in-depth post about a very important element of VBA – the Workbook.  I hope you found it beneficial. Excel is great at providing many ways to perform similar actions but the downside is it can lead to confusion at times.

To get the most benefit from this post I recommend you try out the examples. Create some workbooks and play around with the code. Make changes to the code and see how the changes affect the outcome. Practice is the best way to learn VBA.

If you found this post useful then feel free to share it with others using the bar at the side.